New Study on Brain Synapses and People with ASD

I saw the following article and video this morning and encourage everyone to take a few minutes to do the same:
http://blog.theautismsite.com/SynapsePruning/?utm_source=social&utm_medium=autaware&utm_campaign=SynapsePruning&utm_term=20150318
I am not a neurologist, or even close, but I am pretty well versed in all things Autism. This study confirmed some things I had already thought of, and raised even more questions I now have. What I would give to be able to speak to the Autism Speaks representative being interviewed for a few minutes and ask some questions.
I highly doubt anyone from Autism Speaks is going to pick up the phone, so let's see what we can figure out with the basic information given. I'm a visual person, so if you learn that way, check this out.
First, let's make sure we remember exactly what a "synapse" is in the brain. I haven't been in a science class in...a while....So, I went to faithful Google, who directed me to a very helpful site that I felt didn't go over my head (pun totally intended):
"Neuroscience for Kids"
https://faculty.washington.edu/chudler/synapse.html

Information from one neuron flows to another neuron across a synapse. The synapse contains a small gap separating neurons.

The study seems to explain sensory issues very well and I get that. Too many synapses in the brain means sensory overload. The bright is brighter, the loud is louder and so on. What I don't understand is how that specifically effects communication.
The closest answer we get is at the end of the video, they speak briefly about the possibility that some children with ASD may have some synapses "pruned" that weren't supposed to be. This could explain the difficulty with communication and social issues.
Here is how I see it: 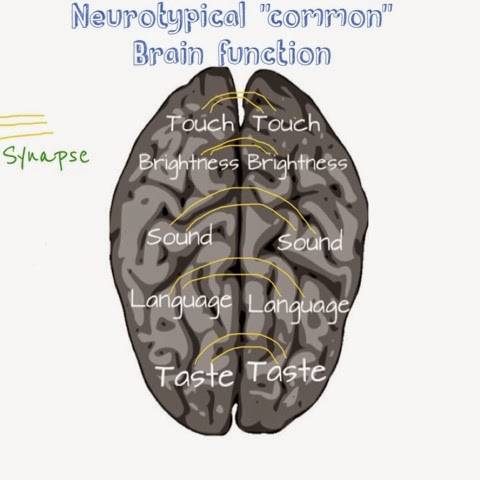 Here is an EXTREMELY rudimentary drawing showing typical brain function. You have the same number of synapses communicating completely. You see the light, your brain perceives it at the right brightness and it doesn't bother you. 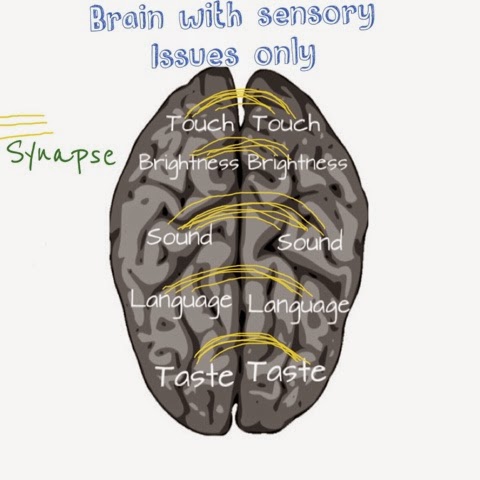 On this drawing I imagine is a brain with sensory overload issues only. There are too many synapses, so the bright is too bringht, loud is too loud and so on. The opposite would be for sensory-seeking people. They wouldn't have enough synapses communicating, so they would seek more input. 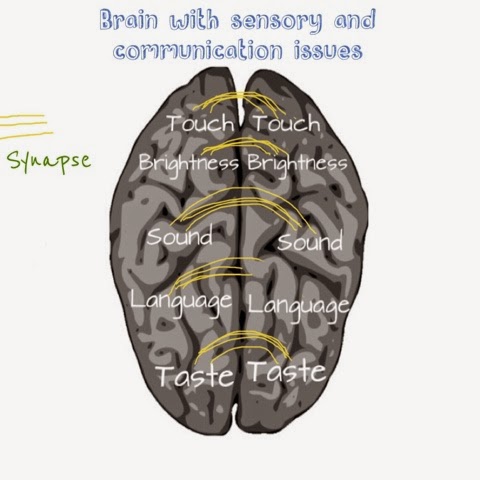 This is how I now imagine my son's brain. He has battled sensory issues (overload) and has communication issues. Here the brain has too many synapses at some points (touch, brightness, sound, taste) and some don't connect and break off midway (language).
I hope this may help someone trying to understand Autism and what causes some of the symptoms. Again, I'm no neurologist, just a mom trying to make sense of ASD.
Hopefully this study will continue to bring attention to research and we will keep getting closer and closer to a real understanding of ASD. But we're now reaching a level where you wonder at what point are you repairing a brain and at what point are you changing a person? I have said many times that I would love to help my son communicate easier, but I don't want a different child. He is kind and sweet and loving. I love my baby the way he is, but I would love to hear him speak. I will leave you with a quote that I find really applies to this study:
"You are your synapses. They are who you are."
--- Joseph LeDoux, 2002 (in Synaptic Self)
So how do we know when enough is enough? I know I'm not capable of making that decision. For right now, I put it in God's hands and know He will continue to lead me where I need to go.
-Boog's Mommy
Posted by Unknown at 5:55 AM