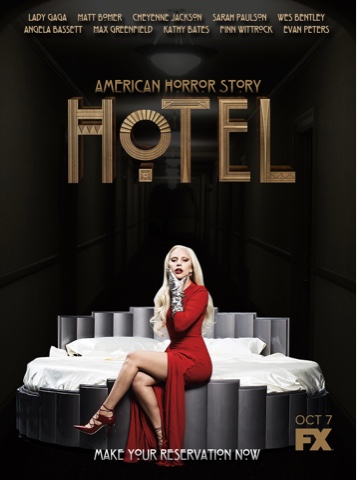 In this season actress Chloe Sevigny plays a pediatrician that makes house calls. I cannot tell you how shocked I was to hear her dialogue in the first episode of AHS: Hotel. Within the first 30 minutes of the episode, she complains to her husband about how frustrated she is. She's irritated that parents aren't vaccinating their children and whooping cough is now coming back. I had to rewind the dvr....Did I hear that correctly??

Okay, this show is produced by Ryan Murphy, known for his shock tv shows and pushing limits (Nip/Tuck, Scream Queens). Did I really just hear common sense on a tv show? Then later in the show, Chloe's character goes to a house to see a very sick little boy. Her dialogue with his mother is went something like this:

Mom: Is he okay?
Chloe: He has measles.
Mom: Oh, good! It's just measles.
Chloe: (visibly annoyed) If you had done as I suggested and had him vaccinated, this wouldn't have happened.
Mom: We just did what we felt was right and we heard vaccines cause Autism! That's scary!
Chloe: No, measles are scary!

Wow. Did not expect to hear something like that from a show made in California (where the Autism/Vaccine link folklore began by a man with no medical license). I have heard California is having more cases of whooping cough because it's the state with the most unvaccinated children. Was this Murphy's way to get parents' attention? If so, I really applaud him.

As I've said before, I am not pro-vaccines. I am pro-education. Some children with pre-existing conditions or genetic issues may not need the vaccines or something could get worse. Or maybe they need to space the vaccinations out for a longer period of time. That is why it is imperative you speak with physicians you trust. Get second opinions. Don't just go by what some mom at the park told you.

Most of us parents with young children don't know what it was like before vaccines. My mom told me years ago about two boys that were best friends she went to school with. One boy had the polio vaccine and one didn't. The boy who had the vaccine was physically fine. His friend could barely walk after he contracted polio and had to use assistive devices to get to class. Do your research. Listen to your child's pediatrician. If you don't like that doctor, find another. Do whatever it takes to make the right decisions for your child and have those decisions based on proven facts, studies, and real statistics. You owe your child that.