Giving My Child a "Voice" No Matter What Form It's In

Boog turned six yesterday and we took him to his favorite museum instead of having a big party. I decided this year that I would make his next birthday "all about Boog" (pun intended!) and do what he would want to do. A busy party so,ermines isn't the best thing for a child with sensory issues, but more than that I just knew he would have way more fun at the museum.

We have been going to the museum for years because Boog likes to look at the enormous fish tanks they have. He has always gone from tank to tank, looking for a minute or two and then moving on to the next quickly.

This time, it was different. Very different if you're like me and notice the little things. Boog stayed at each giant aquarium a lot longer (5 minutes at one) and he was tracking the fish! Tracking (following an object with your eyes as it moves) can be very difficult for some child with Autism. Boog tracked the fish while they swam around and when I asked him "Do you see that one?" He pointed at the fish. This is so big and it means so much that is difficult to describe unless you have a special needs child. Basically, Boog is becoming more and more aware and interactive with his surroundings.

Another thing I noticed was that while we were walking around and I was holding his hand, he squeezed my hand several times. Not hard, but a squeeze that meant "I'm happy, Mommy!". This has never happened before and I cannot tell you how happy I was each time he squeezed my hand. I felt a warm rush of maternal love, excitement and thankfulness every time. God is good!

We had some more "firsts" yesterday as well:
-Boog opened his birthday presents! I put each gift in a bag with no tissue so he could get the present out easily and also see that there was something inside. By the third gift, he was excited! He realized all the bags were for him and had new fun things!

- Thanks to years of therapy, an amazing teacher, and a hard-working, precious little boy, he had a HUGE accomplishment in school yesterday. He typed "cat" by himself. This is just days after realizing how many words he can read. I couldn't believe it when my husband told me after picking him up from school. He typed a word by himself on a keyboard! Years of therapy for fine motor skill development, understanding the requested task, and the ability to read all combined to make this possible. This means when we get a communication device, Boog may finally be able to express himself in ways he never has before, or in a much easier way. Again, God is GOOD! 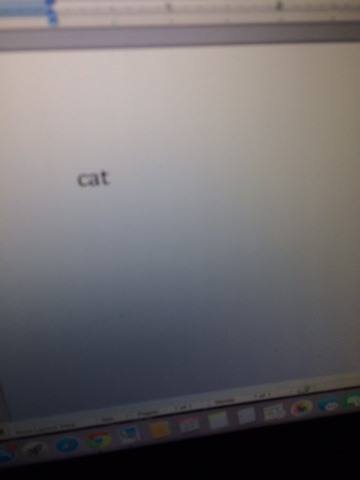 On hard days I need to remember today. Remember to be thankful. And remember we are moving in the right direction... and it's quicker than I thought it would be.